I grew up with one brother and one sister—a typical 50s family.  My mother-in-law, however, grew up in a different world—she shared her childhood with five sisters and eight brothers.

Walter Garver and Hazel Alwood were married in Clare County, Michigan in 1914.  Over the next 25 years, they had fifteen children—in order, they were Doris, Charles, Wayne, Forest, Lester, Fern, Donna, Walter, Virginia, Max, Robert, Rex, Betty, Marlyn, and William.  All survived to adulthood except the last, William, who died from congenital heart disease at only five days old.

The family grew up in a small farmhouse on Adams Road in Clare County without much money, but with a determination to make the best of what they had.  Hazel managed to keep her ever-increasing brood fed; my mother-in-law Donna says, “We always had enough to eat—but it was a lot of beans and potatoes.” She once told me that her mother’s attitude about the new babies was, “One more won’t make that much difference!”  (One of Hazel’s sisters, Floy Dell Garver Haring, had a brood of sixteen.)  Donna says that “Mom had one baby mid-bread-making—Fern stepped in and finished the bread.”  Walter was a farmer, raising hogs and milking cows on 40 acres, and in the 1930s, he did WPA work helping to build Route M61—by hand, with shovels.

The sisters were close, sharing everything.  In another story I told of Donna and Virginia writing to a sailor boy in WWII, who ended up as Donna’s future husband.  Two of the boys, Wayne and Forest, were in WWII on the Japanese island of Okinawa at the same time—and one of them managed to slip away from his unit to see his brother—a story I should tell another time. 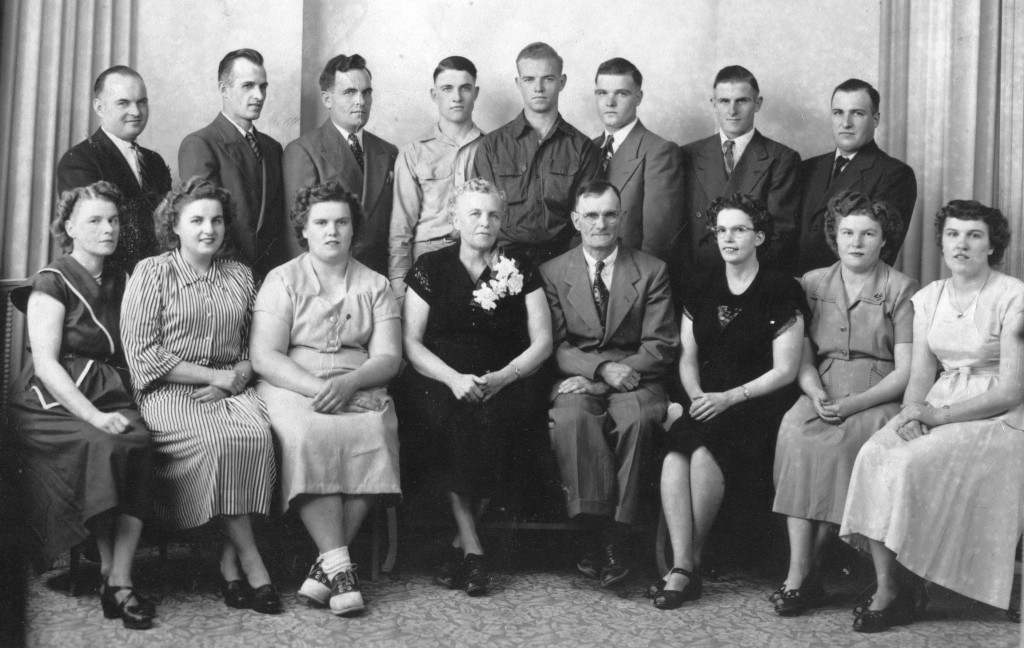 The fourteen surviving Garvers all grew up to marry and have children; my husband has 47 first cousins! They all got along well through the years and as far as I can see, they still do.  Since 1948 the siblings have had a family reunion in Clare County every Labor Day weekend.  The group gets smaller every year, but no less close.  Last September there were only five of them still living—Forest, Donna, Virginia, Betty, and Marlyn—sister Fern being the most recent to leave this world.

Two of the brothers came to a tragic end…  In 2007 Max and his wife were killed in a fire in their house trailer, and that same year, Rex—who took over the family farm in the 1970s—was gored to death by a bull. But through all the years and all the tragedies, the Garver siblings have stuck together, supporting each other in good times and bad, helping each other whenever they could, and meeting together on Labor Day to remember those who have passed and celebrate their strong family bond.  It’s a family I’m proud to have married into.