Family History is about more than just finding the names and important dates of those that came before us, it is a quest to discover the narratives of our ancestors lives. But finding that information can be difficult and sometimes requires creative solutions, such as reviewing old newspapers or examining historical events that affected large populations.

That’s why a unique website like GenDisasters.com is such an invaluable free resource. GenDisasters provides a database of tragic events, primarily via transcribed entries, many of which are taken from newspapers. The entries include lists of who was involved, killed or injured in the event.

Let’s take a closer look at how to use the site most effectively, and see what sort of stories our sample searches might yield.

Searching By Name on GenDisasters

Certainly, the most straightforward method is to search by name. This is accomplished by using the search box in the upper right of the screen.

Be aware that there may be advertisements on the free page that also look like search bars, but instead will take you to “public records searches” from companies that are completely unaffiliated with genealogical searches. So long as you stick with the search bar pictured in the image, you’ll be fine.

Once there, insert any names you’ve encountered from your own family tree, or even the names of people who are connected to your family, and see if you get any matches with these names in the records of disasters. You can browse through the search results, quickly eliminating many results that do not fit because of the time period or location.

A couple of things to consider as you conduct name searches is how important it is to include variations. Remember that a majority of these records are taken directly from newspapers, and they use different naming conventions than legal records, like birth and death certificates do.

You may be accustomed to entering a relatives’ full legal name (first, middle, last) into a search as that will often provide you with the most relevant results, but that can be counterproductive in a search that depends on newspapers for a source. Oftentimes anything besides a person’s last name may be shortened to a person’s initials. In older newspapers, married women are most often referred to as just by their husband’s name.

Not just the last name, but the first name as well. So a woman named Janet Leonora Lee who married Abe Robin Palmer might be called Mrs. A. R. Palmer, Mrs. Palmer, Mrs. Abe R. Palmer or Mrs. Abe Palmer, but rarely would any of her other names be mentioned unless they were directly relevant to the news story at hand. That’s why it is important to include the full names of husbands (including variations) of relatives, even if the spouse is not one of your own ancestors. Nicknames or other shortened versions of names provided by witnesses, friends, co-workers and family were also used in news stories.

Let’s pretend that your great-great grandfather came to New York City in 1874, via Castle Garden. Searching through Castle Garden records you had found out that he had arrived in this country, with his cousin, George Lott.* You haven’t come across any additional records of this George Lott later than the Castle Garden entrance records, and you’re curious to learn more about this cousin of your great-great grandfather. You enter the name “George Lott” into the search bar, and here are the results that you get back. 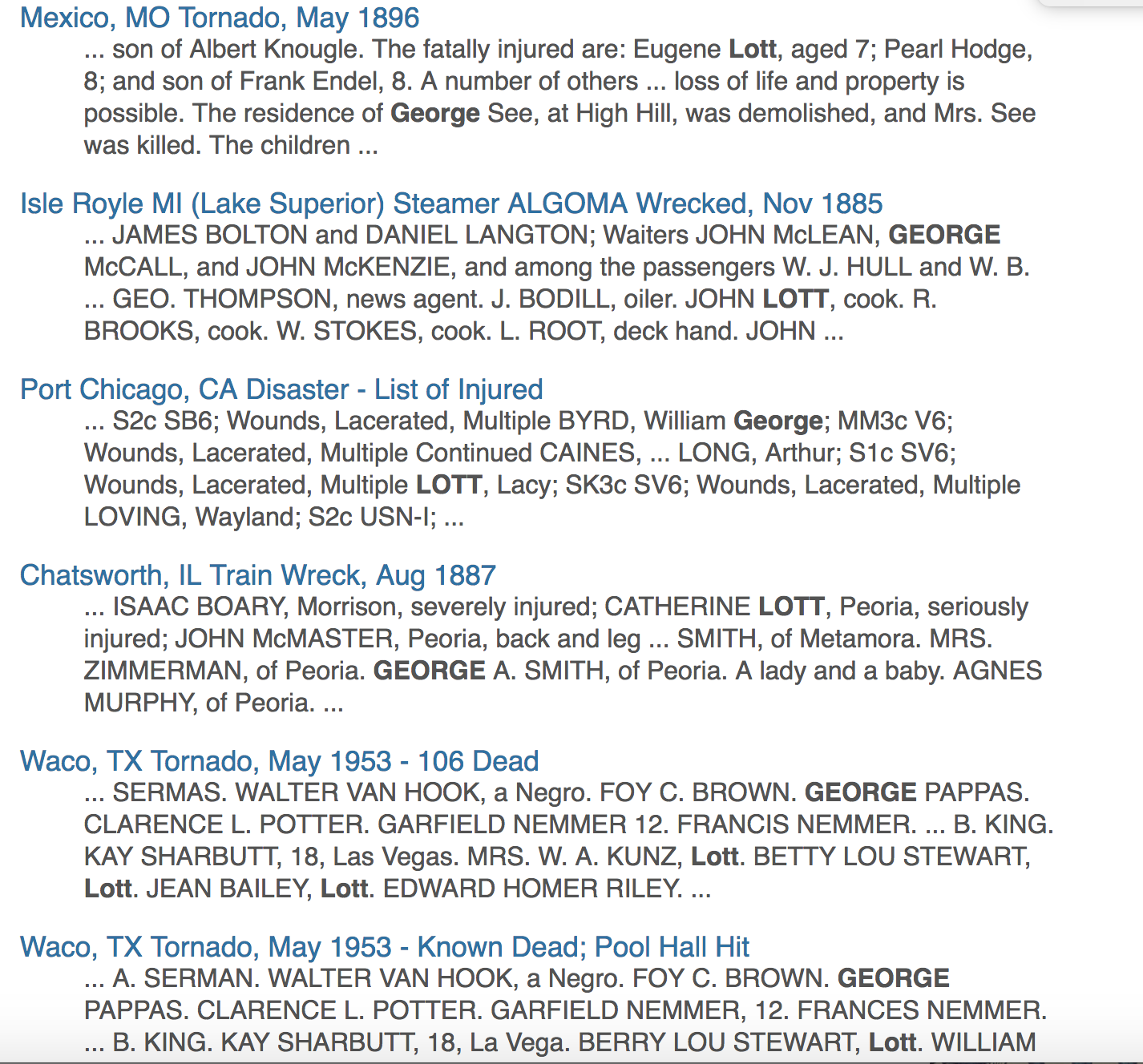 That’s a total of 10 records. However, you can quickly scan through them and eliminate the irrelevant ones quickly by seeing that very few match the obvious criteria of name match, location and timeframe. For someone who entered the United States in New York in 1874, and had family who remained local, you’ll want to start with things that are closest to that date and location.

The obvious choice from this list is the Brooklyn Theater Fire of 1876. In reading that story, you find that there was in fact a George Lott, age 22, who perished in what is the third deadliest fire in a theater or public assembly buildings in the United States. You also find that George Lott was the son of Charles Lott, who kept order in the gallery, and was extremely well-liked. George Lott, at age 22 would have been the right age to be your great-great grandfather’s cousin, and your own great-great grandfather had immigrated to the United States to meet his father here after he was somewhat established.

Now imagine that instead of using George Lott as my hypothetical example, I instead was looking for a George Logan. Had I entered that name into the search bar, I’d have been met by 6 pages of results. That’s hardly easy to scan quickly so instead I can take advantage of the Advanced Search function directly below the search bar. Upon clicking that I can narrow the search results either by including or excluding specific terms, choosing the type of source material, or by limiting the search by category.

Here I began by limiting the search to just New York. I select New York State under Advanced Search, Categories, and the category code (198) is automatically entered into the search bar, and I press enter. 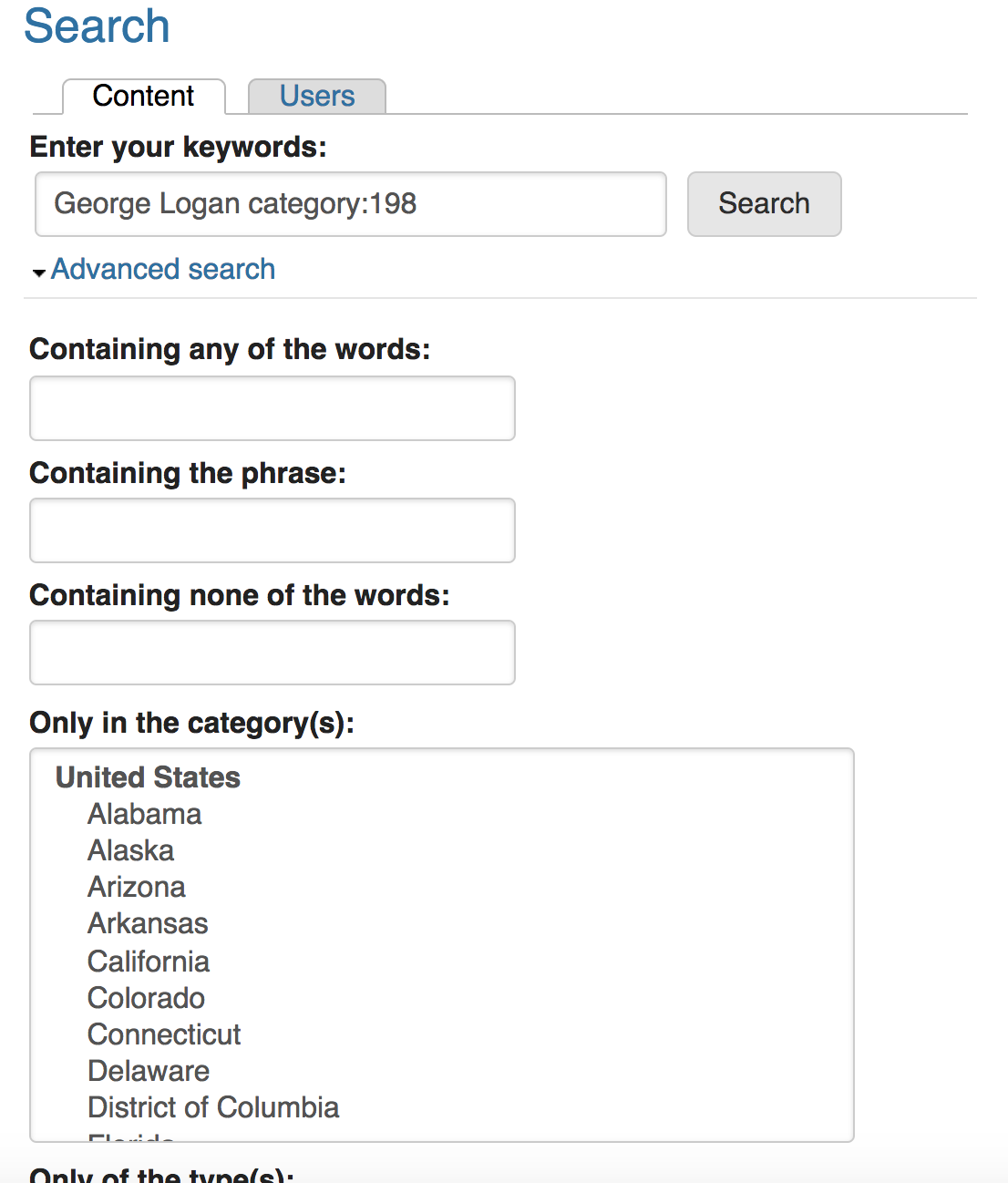 There are still too many results, so I want to restrict my search results further. I decide to add an additional filter of timeframe. While on the screen that shows the search results for George Logan, limited to New York State, I click Advanced Search again, and go into the categories section again. I select the years 1875-1880 by pressing the Shift-key and clicking on those years. Now the category codes for each individual year are added to the search parameters. This yields a much more manageable four results. Browsing By Location and Date on GenDisasters

Of course, we are not always so lucky to have a name to search for. Perhaps you vaguely remember your grandmother telling you a story about having a young cousin who had been killed in a bridge collapse. That part of the family came from West Virginia, and based on your grandmother’s birthdate, this would have occurred in the late 19th or very early 20th century.

At the top of the home page is the option to browse through different categories.

Select Browse Disasters and choose Bridge Collapses. You’ll get a long list, but if you scroll down on the right-hand side-bar, you’ll be able to narrow down your options.

When you scroll down further, West Virginia only has six bridge collapses recorded, only two of which will fit with the time period. And you find that there is a bridge collapse in 1904 in which three young girls died, including one named Olive Gibbs*. Gibbs was your great-grandmother’s maiden name, and so it is extremely likely that you just found another relative, along with details of a poignant story that your own grandmother and great-grandmother experienced firsthand.

*Please note, that while George Lott was a real person who very sadly died in the Brooklyn Theater Disaster of 1876, and Olive Gibbs was a teenaged girl who was tragically killed from injuries due to a bridge collapse, the backstories I have included are completely fictional and serve only as an example to help illustrate how one may use these resources in active research.

To expand your newspaper archive searches find out how to use Newspapers.com.

Editor’s Note: I first became aware of the fascinating GenDisasters site when I was researching my 4th great grandfather Ebenezer Huse Jewell who, as a train engineer, died when a bridge collapsed in Joliet, Illinois in 1857. An article about this event appears on GenDisasters but my ancestor’s name is not included. Be aware that you may need to explore events by date and location if you know your ancestor was involved in an event but cannot locate them by name. This specific event is also listed under Train Wrecks rather than Bridge Collapses as one would expect, a good reminder to be flexible in your browsing. GenDisasters will take basic search functions such as quotations for exact searches (ie “Amy Marion”) and a minus sign to remove a term (such as “Amy Marion” -Jones). These functions will help you locate your ancestors more easily.  ~Melanie Mayo, Family History Daily Editor

About the Author: Though Alexandra Mendez-Diez has not invested a great deal of time into researching her own genealogy, on her father’s side, a few well-placed phone calls to Miami once led to her discovering and meeting long-lost teenage second cousin twins in Havana. And while she would like to look further into the less common spelling of her second apellido to find out if it is as she suspects a direct link to Sephardic Jews from Spain, she’s been much more preoccupied with researching the genealogy of James Joyce’s fictional character Molly Bloom from Ulysses. This has taken her to Granada in the South of Spain, where she spent several months sorting through early 20th century hand-written court archives in search of Molly Bloom’s mother, a woman who never lived (hazard of being fictional), but could have.

Image at Top: Odessa, MN Train Wreck 1911. See this page on GenDisasters for information about this event.

Whether you’re brand new to family history research or just want some help with the basics, our beginners’ guides - including our Family Tree Starter Guide - have the expert information you need.

Discover how to build your best family tree with our online courses. Learn with detailed tutorials, expert guides, hands-on lessons, quizzes and much more. Your registration never expires.

Billions of free genealogy records are available online, you just need to know how to find them. We’ve made the job easy with lists and guides to help you discover the records you need.

Find Free Sites
Send this to a friend